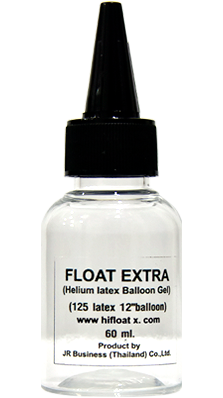 Float ExtraTM gel was discovered and developed in 2015 by a group of agricultural technology students at a university in Asia. The initial aim was to produce a cling film in an environmentally conscious manner that safely preserved various foods whilst sealing in the accompanying aroma's.

Float ExtraTM Gel breaks down very easily resulting in a rapid decomposition without any residue. It is compatible with many different gasses including Helium, where for example it's use can prolong the life of a balloon by up to 3 times.

Push the nozzle of the pump up the half of the balloon float extra gel should fallen to the bottom of balloon , then grip the balloon’s neck firmly then press the pump head To make the gel enter into the balloons according to the quantity notice in the text below.

Balloon size and amount of gel

- If the gel touches the skin or into the eyes, wash with soap and clean water few times. (If you have any allergic or reactions should consult your doctor) And for increased safety, it is recommended to wear safety glasses when filling gas in balloons to avoid direct eye contact.

One final note, a float extra gel, is designed to work in a balloon that is stored inside a building in a place where the weather is controlled, with a heater or air conditioner different from the use of a float extra get with balloons Stored outside the building, in an uncontrolled environment may cause the floating of helium gas balloons to decrease. Float extra gel, the gel is non-toxic and friendly use to the environment, Can decompose in to the nature.

Please keep out of reach of children